The CNBC is enhancing its neutron imaging capabilities to see inside concealed objects. Identifying unknown radioactive material reduced the cost of a long-term waste management liability for the Government of Canada and demonstrated new capabilities.

The knowledge gained enabled CNL to (1) properly record the capsules’ contents in the nuclear materials inventory, (2) determine how the capsules could be opened safely, and (3) reduce the number of tile holes required to store the fissile material by 75 percent. 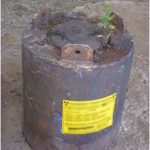 Neutron imaging works much like light in a camera, except the neutrons easily pass through dense, solid materials that even x‑rays cannot penetrate.

Canadian Nuclear Laboratories was recently presented with an unidentified container that predated modern standards for storage of radioactive materials. The container was dubbed ‘the mystery flask’ or ‘the legacy flask’. When opened in a hot cell, the legacy flask was found to contain four radioactive capsules of unknown origin, with no records to identify them or their contents. The radiation from the capsules indicated cesium, suggesting they contained irradiated fissile material. 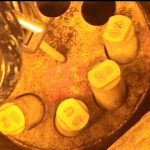 To properly dispose of such material, CNL needed to know what the material was and how much of it was inside. But without knowing more about what was in the capsules, it was difficult to know whether—and how—they could be safely opened. 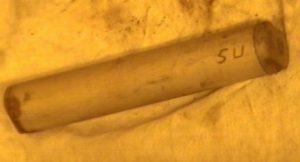 One of the capsules removed from the chandelier

A research team from CNL was formed to solve this riddle. To determine the four capsules’ internal structures and contents without opening them, the researchers applied x‑ray fluorescence spectroscopy combined with three techniques that used neutron beamlines at the Canadian Neutron Beam Centre: neutron diffraction, neutron imaging and delayed neutron activation analysis. 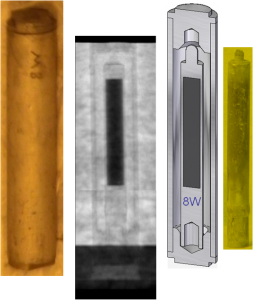 Neutron imaging revealed that each capsule contained a cylindrical core surrounded by an aluminum canister. This canister-core assembly was contained in the aluminum capsules and loosely retained by the end caps.

Combining the results of all four techniques, the CNL team determined that the canister cores contained irradiated thorium and uranium, and how much of each. The team was then able to determine that the canisters were likely irradiated in the late 1950s as part of an early isotope production program.

The value of this knowledge to the Government of Canada’s Nuclear Legacy Liability Program was significant. Firstly, it enabled the proper recording of the capsules’ contents in the nuclear materials inventory. Furthermore, it determined how the capsules could be opened safely and also reduced the number of tile holes required to store the fissile material by 75 percent.

This project also served to demonstrate the CNBC’s capabilities in neutron imaging and neutron activation analysis. As a result, these capabilities are now being further developed to be able to serve more clients. In fact, Defence Research and Development Canada (DRDC) has provided funds to purchase equipment to upgrade the CNBC’s neutron imaging capability because neutron imaging will be valuable for meeting other nuclear forensic challenges, such as identifying nuclear materials in containers found by police or military personnel.