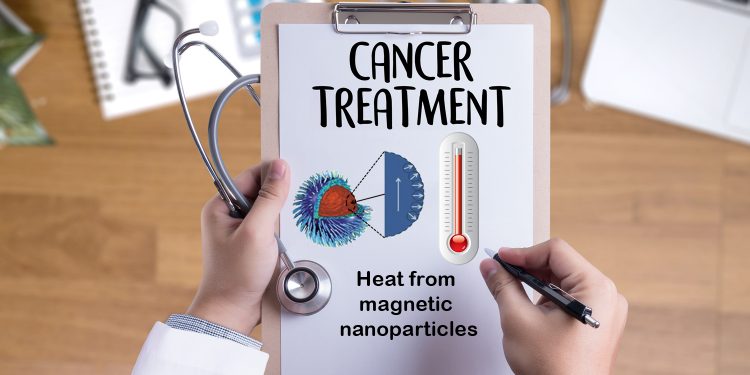 A University of Manitoba physicist is part of an international research team developing a cancer treatment method that uses magnetic nanoparticles to kill tumours with heat.

The idea of using heat to destroy cancerous tumours has been around for a long time. However, according to Johan van Lierop, a professor of physics at the University of Manitoba, “the challenge is to overheat the tumour without overheating the surrounding healthy tissue as well.” So far, this challenge has limited the use of heat treatment to only a handful of cancer applications, such as treating certain kinds of brain tumours.

Medical researchers around the world are feverishly searching for ways to overcome this challenge, as today’s cancer treatments don’t always work. Furthermore, many tumours are currently being treated with radiation therapies, which can have detrimental side effects. According to experts, many kinds of tumours would best be treated with both radiation and heat, since this combination would lower the radiation dose required—and thereby reduce the treatment’s side effects and shorten recovery times.

Van Lierop and his international collaborators are exploring one way to make tumour-destroying heat treatment more applicable to different kinds of tumours. Their method is to inject the tumours with magnetic nanoparticles that generate heat in response to an alternating magnetic field. The resulting heat would be just enough to kill the tumour without damaging the surrounding tissues or organs. This approach is incredibly promising; in fact, some patients with brain tumours have recently been treated successfully in several German hospitals using a very similar method that is in late-stage clinical trials.

After a single treatment, the heat that was generated caused a nearly complete regression of the tumours.

Our discoveries are now feeding into the design processes of other research teams all over the world.

Robert Ivkov, a professor of medicine at Johns Hopkins University and one of van Lierop’s collaborators, envisions a day when these magnetic nanoparticles will be used to treat prostate cancer, as this cancer is often detected too late for conventional treatments. Cancers of the neck, throat, and breast are just a few other examples of cancers that could be treated with this method, as these tumours are often close to the skin’s surface, allowing for easy injection of the nanoparticles.

The heat generated by the magnetic nanoparticles used in cancer treatments is based on the same principle that causes a laptop’s AC adaptor to get warm while charging.

The underlying principle of this treatment method is pretty basic: heat is generated from a magnetic material using an alternating magnetic field. The same principle explains why a laptop’s adaptor gets warm whenever it is plugged in—because the alternating current (AC) in the adaptor creates an alternating magnetic field around an iron core. The orientation of the iron’s magnetization flips every time the direction of the magnetic field changes, which happens about 60 times per second. Since this flipping process is not perfectly efficient, some of the electrical energy is lost as heat in the iron.

Normally, such heat loss is seen as waste, and engineers try to reduce it to conserve energy. In contrast, van Lierop and his collaborators want to maximize this heat production. However, it isn’t simply a matter of adding more magnetic material (i.e., nanoparticles) to boost the temperature; in fact, doing so would reduce doctors’ precise control over where the heat is produced and could magnify any side effects from the magnetic nanoparticles themselves.

“From a materials perspective, the challenge becomes how to design nanoparticles that produce heat most efficiently,” says van Lierop. However, this task is extremely difficult, as “the mechanisms for this heat production lack a complete physical description.”

“When we started this research, we didn’t know much about the characteristics that are important for maximizing the heat delivery,” adds Cindi Dennis, a physicist at the National Institute of Standards and Technology (NIST) in the U.S. and one of van Lierop’s collaborators. “Much of our knowledge was based on theoretical calculations, and these calculations made simplifying assumptions that our research soon revealed to be wrong.”

In a series of studies over the last decade, van Lierop, Dennis, Ivkov, and their collaborators from other research institutions in the U.S. and Germany have made significant discoveries about how magnetic nanoparticles produce heat.

The characterization method that was most critical to understanding the magnetic properties of the nanoparticles, however, was a specialized neutron beam technique.

In one of their earliest experiments, the researchers treated mice that had tumours mimicking human breast cancer by injecting magnetic nanoparticles and using external equipment to produce an alternating magnetic field around the mouse. The team measured how much heat was delivered to the tumours under various magnetic fields, as well as how quickly that heat was administered, and observed its impact on tumour growth. This study was an important demonstration of the experimental capability, which they would follow-up on soon after.

“Neutron beams allowed us to see what’s going on physically and magnetically inside the nanoparticle while the particles are in a realistic environment,” explains Dennis. “Other methods aren’t sensitive to the magnetic structure, require unrealistic conditions, or can’t probe down to the nanoscale.”

In early experiments led by Dennis and Ivkov, the research team examined two different kinds of nanoparticles that were both composed of a magnetic core encased in a sugar coating. The main difference between the two nanoparticles was that one had a double layer of the coating. 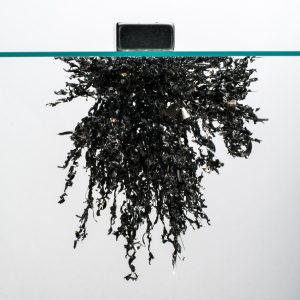 Prevailing thought at the time, as informed by scientific models, suggested that the double layer shouldn’t make a huge difference in terms of the heating effect—but it did. As the neutron beam data revealed, the nanoparticles with the double layer tended to gather together in magnetic alignment. Furthermore, this magnetic alignment amplified the heating effect by a factor of seven. This finding overturned the previous assumption that the nanoparticles could be treated as independent units. Indeed, as the experiment showed, neighbouring nanoparticles can have an enormous effect on each other.

In subsequent research, van Lierop, Ivkov, Dennis, and their collaborators demonstrated the successful treatment of mice’s tumours using these double-coated nanoparticles. After a single treatment, the heat that was generated caused a nearly complete regression of the tumours. Furthermore, the tumours regrew in only 25 percent of the mice. These promising findings were published in a landmark paper in 2009 (doi:10.1088/0957-4484/20/39/395103). Still, some questions remained about the exact mechanisms that caused the double-coated nanoparticles to generate so much heat.

Therefore, the research team set out to examine a wider range of nanoparticles to shed light on what precise characteristics made the double-coated nanoparticles so advantageous for heating, and to determine what other factors would be important to further improve the heat generation. In fact, they identified a set of previously overlooked factors that turned out to be essential to the heating process.

One such factor related to the nanoparticles’ magnetic domain (i.e., the region where the magnetic fields produced in the material are all aligned in the same direction). The researchers used neutron beams to characterize the magnetic domains within their nanoparticles and found a rather complex multi-domain structure. Prior to this study, the models were frequently based on the simpler case of a single-domain magnetic core, assuming that a more complicated structure would have negligible effects. However, the team was able to model their observations to show that the multi-domain structure undoubtedly was a significant contributing to the nanoparticles’ effective heating abilities; they reported these findings in 2011 (doi:10.1063/1.3540589).

Illustration of three different kinds of magnetic nanoparticles and the magnetic domain structures inside their cores, as determined by neutron beam analysis. Arrows in the cores indicate the direction of the magnetic fields produced in each material. (Image: Wiley)

The team’s conclusions about how a multi-domain structure affects heating had important implications for cancer treatment, as they introduced the enticing possibility of deliberately designing the magnetic core of the nanoparticles for optimal heating. Before this could be accomplished, they needed to examine a wider range of core types.

To do so, the researchers examined a set of three other nanoparticles that had similar physical properties, but quite different cores (i.e., ferromagnetic, magnetic, or magnetic crystal cores). These differences turned out to be quite striking, and computer modeling showed that these core variations were responsible for the observed differences in heating ability, which varied by as much as a factor of four between the types. These findings, which were reported in 2015 (doi:10.1002/adfm.201500405), have led to excitement in both the physics and medical communities.

Ivkov is now taking the lead on the pursuit of pre-clinical trials to demonstrate the cancer-killing abilities of improved nanoparticles.

“Our discoveries are now feeding into the design processes of other research teams all over the world,” says Dennis.

In fact, the team’s cumulative findings represent a paradigm shift in scientific thought in terms of designing nanoparticles for applications like treating tumours.

“The collaboration between physicists and biomedical scientists was quite powerful,” says van Lierop. “While we physicists provided the skills and techniques to characterize and understand the materials, our partners have helped determine our approach to the research, to ensure the results would be useful for developing biomedical applications.”

Indeed, Ivkov is now taking the lead on the pursuit of pre-clinical trials to demonstrate the cancer-killing abilities of improved nanoparticles.