Neutrons help to remove barriers standing in the way of safer, better batteries for electric vehicles 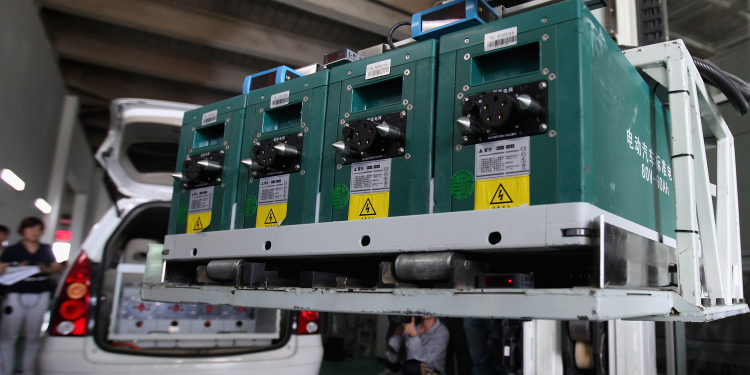 After using neutron beams to better understand materials required for safer energy storage, University of Calgary chemists and their international collaborators were able to demonstrate a prototype battery that showed major improvements to performance.

Source:  Canadian Institute for Neutron Scattering, with information courtesy of UToday, University of Calgary.
Contact: webmaster@cins.ca
Image: The large batteries used in electric vehicles store incredible amounts of energy and therefore must be designed with safety in mind. (breakingenergy.com)

Electric vehicles promise to revolutionize transportation—but safer, better-performing batteries must first be developed before this potential can be turned into a reality. One of the primary challenges is to find a less hazardous electrolyte material for the batteries used in ‘green’ cars. Indeed, the lithium-ion batteries used in today’s electric and plug‑in hybrid vehicles (as well as in portable electronic devices) typically contain flammable liquids as their electrolyte; as such, faulty manufacturing can lead to fire hazards.

Although the risk of harm is small, it can result in substantial financial losses. For instance, the October 2016 recall of Samsung Galaxy Note 7 smartphones due to igniting batteries was estimated to have cost the company at least $5.3 billion. While such recalls are rare, if similar safety concerns were ever to be raised regarding the batteries in electric vehicles, car manufacturers could be on the hook for even more money.

In addition to their potential flammability, lithium-ion batteries have poor chemical stability, which restricts their battery life. Furthermore, their limited operating voltage reduces the total amount of energy they can store.

Professor Venkataraman Thangadurai, a chemist at the University of Calgary, is working hard to overcome the shortcomings presented by today’s lithium-ion batteries. Thangadurai is an Associate Director of Calgary Advanced Energy Storage & Conversion Research (CAESR), a technology centre at the University of Calgary that aims to reduce greenhouse gas emissions on two fronts: first, by developing better batteries for clean energy storage; and second, by advancing technologies such as fuel cells, which convert clean fuels like hydrogen into energy.

Excitingly, Thangadurai and his collaborators at the University of Maryland have recently developed a button-sized lithium battery that is non-flammable, chemically stable, and capable of operating safely at higher voltages than existing lithium-ion batteries. “The technology we have developed would enable absolutely stable, robust, safe, high-powered, all-solid-state lithium batteries for future energy storage,” says Thangadurai. 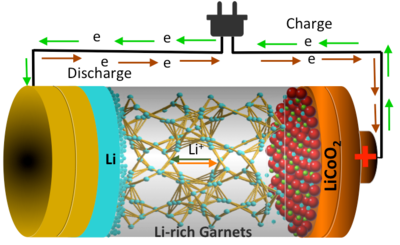 Illustration of a lithium (Li)-rich garnet electrolyte in an all-solid-state lithium rechargeable battery. One electrode is composed of lithium metal, while the other is made of lithium cobalt oxide (LiCoO2). Electricity is produced through the migration of electrons (e) in the external circuit in reaction to the movement of lithium ions (Li+) inside the battery. (Image: University of Calgary)

A key feature of Thangadurai’s battery is its electrolyte, which consists of a solid ceramic material known as a ‘lithium-rich garnet electrolyte.’ This material gets its name from the garnet gemstone, because its atoms are arranged in a pattern, known as its ‘crystal structure’, similar to the gemstone’s crystal structure.

Garnet electrolytes are known for their excellent ability to conduct electrically charged atoms (i.e., ions) while also remaining chemically stable when in contact with pure lithium metal. This chemical stability is of utmost importance, as lithium is extremely reactive—so much so, in fact, that its pure form is never found in nature. “Since garnet electrolytes were discovered over ten years ago, they have been the subject of much fundamental research to understand and improve the underlying mechanisms that cause their attractive physical and chemical properties for use in batteries,” says Thangadurai.

Thangadurai’s own research group has been heavily involved in many of these exploratory studies investigating lithium-rich garnet electrolytes. Indeed, his team has sought to learn as much as possible about these promising new ceramic materials by using a variety of experimental approaches, including probing the materials with x‑rays as well as with neutron beams.

“Neutron beams are needed to provide key knowledge about materials’ structures to understand their functional performance,” explains Thangadurai. “Neutron beams are specifically critical for determining whether lithium ions and protons [i.e., positively charged hydrogen ions] are present and where they are in the crystal structure.” That’s because hydrogen atoms—the smallest atoms in the periodic table—can easily hide within a material composed of much larger atoms, often making them invisible to x‑rays (although still detectable by neutrons).

In one exploratory study, Thangadurai’s team aimed to make sense of a rather curious observation about garnet electrolytes: that exposure to the air’s moisture causes changes in the material’s performance. Indeed, previous studies had shown that hydrogen ions from ambient moisture would enter the ceramic and displace some of the material’s lithium ions—but researchers still didn’t know how the hydrogen ions behaved inside the material, or even how its crystal structure was affected.

To learn how this atomic displacement might impact the use of lithium-rich garnet electrolytes in batteries, Thangadurai teamed up with chemists at the University of Birmingham in the UK. Together, they accessed neutron beams at the UK’s Rutherford Appleton Laboratory to figure out what would happen when a lithium-rich garnet electrolyte (in this case, Li5La3Nb2O12) was exposed to moisture.

Left: Illustration of a garnet crystal structure, composed of octahedra (purple) and tetrahedra (blue). (Image: Joseph Smyth) Right: Illustration of a portion of the crystal structure of Li5La3Nb2O12, in which some of the lithium (dark blue and light blue spheres) has been displaced by hydrogen (purple spheres). The octahedra of oxygen (red spheres) around the lithium is visibly distorted from its normally perfect geometric configuration. (Image: doi:10.1039/c3ta13005c)

These exciting observations led the researchers to conclude that the electrical properties of the garnet electrolyte were actually due to the movement of both the lithium ions and the hydrogen ions through the material. The team’s findings were published in 2013 (doi:10.1039/c3ta13005c), along with data showing that although the material’s ability to transport hydrogen ions was somewhat reduced as compared to its ability to transport lithium ions, its conductivity remained at the same high order of magnitude.

Instead of viewing the exchange of lithium for hydrogen as a drawback, Thangadurai’s team proposed the intriguing possibility of creating new garnet electrolytes that would take full advantage of this ability to conduct ions other than lithium to produce electricity. In an effort to improve the desirable properties of these materials while eliminating the undesirable ones, the researchers tweaked the material used in their 2013 study by adding calcium and zirconium. Notably, this new material (Li7La2.75Ca0.25Zr1.75Nb0.25O12) showed an increased stability as well as an improved ability to transport ions. What’s more, it had a lower sintering temperature, making it easier for researchers—and future battery manufacturers—to work with.

However, garnet electrolytes still posed one major challenge for battery researchers: effectively, the gap (i.e., interface) between these solid ceramic electrolytes and the battery’s solid lithium metal electrodes acted as a hurdle, impeding the ions’ conductivity. When Thangadurai and his collaborators at the University of Maryland set out to solve this problem, their work resulted in a major breakthrough.

In research published in Nature Materials – one of the top scientific journals for chemistry – in May 2017 (doi:10.1039/c3ta13005c), Thangadurai’s team essentially made this hurdle disappear by adding an ultrathin layer of aluminum oxide between their new electrolyte and the lithium metal electrode. Although this layer was only a few nanometres thick, it enabled faster charging times and higher performance overall—two improvements that significantly boosted their prototype battery’s energy storage capacity and operating voltage as compared to existing commercial lithium-ion batteries, which continue to use flammable materials as electrolytes.

The team’s next steps are to scale up the size of their battery and to study the long-term stability of its materials. Thangadurai expects that it will take about five years to develop a commercial-scale, solid-state lithium battery that incorporates their technology.

In the meantime, “Neutron beams are one of the tools that we will continue to need as we further develop energy conversion and storage technologies—fuel cells as well as batteries,” Thangadurai notes, “because neutrons are critical for determining crystal structures, understanding the chemical reactivity of potential electrodes, or observing the movement of ions through materials.”