McGill University researchers are developing a method for predicting the magnetic properties of new materials even before they are made. This method could help scientists design new low‑cost magnets for more efficient wind turbines and electric vehicles.

Permanent magnets do more than just attach photos to the fridge. In many ways, they have helped shape the modern world into what it is today. For instance, these materials have been key components in electric motors and electricity generation since the 1800s. Motors using permanent magnets are found in many modern devices as well, including computer hard drives.

The Nissan LEAF is one of the first fully electric vehicles on the mass consumer market. It uses a permanent magnet alternating current (AC) motor. (Image: Nissan)

Permanent magnets represent a $7 billion market annually, with the sector expecting double-digit growth over the next 25 years due to increasing demand for clean technologies. Currently, however, this market is dominated by magnets made of rare earth minerals, which are extremely rare and somewhat problematic.

For example, the global supply of rare earths is controlled by a single country, so the potential for price increases could conceivably offset any cost advantages. The mining and processing of rare earths is also environmentally damaging; just getting these minerals to market produces a disproportionate amount of greenhouse gases, thereby reducing the net environmental benefit of the wind turbines and electric vehicles that use them.

For these reasons, a search is now underway to find new permanent magnets that not only have comparable magnetic properties to rare earths, but can also be produced less expensively and with greater environmental sustainability. This is no easy feat, as there are thousands of combinations of elements that would likely result in magnetic materials that have never been produced before. Systematically making each one and testing its intrinsic magnetic properties, including its maximum magnetic strength and the temperature above which its magnetism disappears, is simply not practical.

Professors Zaven Altounian and Dominic Ryan of McGill University in Montreal are two researchers who are methodically accelerating the development of new magnetic materials. Specifically, Altounian is developing a theoretical model to predict the magnetic properties of the numerous combinations, which will greatly reduce the number of compounds that actually need to be made and studied in a laboratory. Meanwhile, Ryan is conducting experimental analyses on various magnetic materials to verify the accuracy of Altounian’s model.

The impact of this research lies in its ability to suggest a path forward for researchers seeking to design new magnetic materials … thereby accelerating the development of permanent magnets for a multitude of clean energy applications.

Their method is based on known patterns of how the atoms are arranged (i.e., the atomic structure) and how the magnetic fields are aligned (i.e., the magnetic structure) for existing materials. It then calculates how these structures change when one element is substituted for another in varying amounts—a process known as doping. Once the new structures are theoretically determined, their magnetic properties can be calculated.

In a 2014 publication, Altounian and his research associate Xubo Liu demonstrated the model’s accuracy at predicting the structural changes that result from substituting elements into a known rare earth compound. In this case, they started with a compound similar to Nd2Fe14B, the world’s most powerful rare earth magnet (and one that is found in many hard drives). Using neutron beams at the Canadian Neutron Beam Centre (CNBC), Altounian and Liu were able to experimentally verify the predicted structures for 11 materials, each with a different third element rather than boron (B).

Altounian and Ryan are now applying this method to predict the properties of non-rare earth magnets, namely doped manganese-gallium compounds. Scientists have speculated that equal portions of manganese (Mn) and gallium (Ga) might produce a magnet with properties comparable to those of Nd2Fe14B—even at 150 °C to 200 °C, the operating temperature of motors in electric vehicles and wind turbines. However, this material has proven difficult to make, and up until now it has not been well studied.

“The difficulties with manganese-gallium alloys have been compounded by the desire to produce samples quickly, before taking the time to understand their basic properties,” observes Ryan. “It is essential to start by establishing the intrinsic properties of these alloys in their simplest forms, because those properties will ultimately set limits on what might be achieved by tweaking it later.” 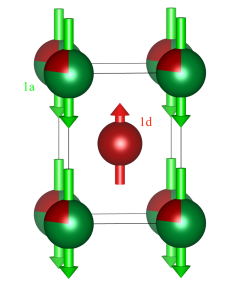 Using neutron beams at the CNBC, Ryan and Altounian have conducted extensive studies on manganese-gallium alloys in recent years. Notably, neutron diffraction confirmed that they had indeed successfully prepared the material in its simplest form. These studies resulted in multiple publications, including one 2015 paper on the intrinsic magnetic properties of several manganese-gallium alloys doped with varying amounts of additional manganese. Curiously, they found that these alloys became less magnetic as more manganese was added. Still, they were able to identify one alloy in particular (Mn1.33Ga) that had excellent intrinsic magnetic properties, although some uncertainty remained about its structure.

The researchers answered many of these questions in a 2016 paper in which they not only explained why adding manganese reduced the magnetization of these manganese-gallium alloys, but also identified where the additional manganese was going in the atomic structure. In soon-to-be-published research, they went a step further and fully solved the atomic structures of these alloys, which then helped them to solve the magnetic structures. Importantly, their observations were demonstrated to be in excellent agreement with Altounian’s theoretical predictions.

With the model validated using neutrons, Altounian and Ryan have recently applied their approach to predict the directional dependence of the magnetic properties of Mn1.33Ga, and have tested their predictions using various other experimental techniques. That research, also soon to be published, demonstrated the ability of the model to predict the intrinsic magnetic properties that a compound would need to have in order for it to be used in practical applications.

The impact of this research lies in its ability to suggest a path forward for researchers seeking to design new magnetic materials. For instance, Altounian’s model could be used to search for a third element to use as the dopant for manganese-gallium alloys (i.e., instead of using extra manganese). This new dopant should replace some of the alloys’ gallium, like the added manganese did in Altounian and Ryan’s experiments, without reducing the overall magnetization. New alloys based on the identified dopant could then be synthesized, thereby accelerating the development of permanent magnets for a multitude of clean energy applications.